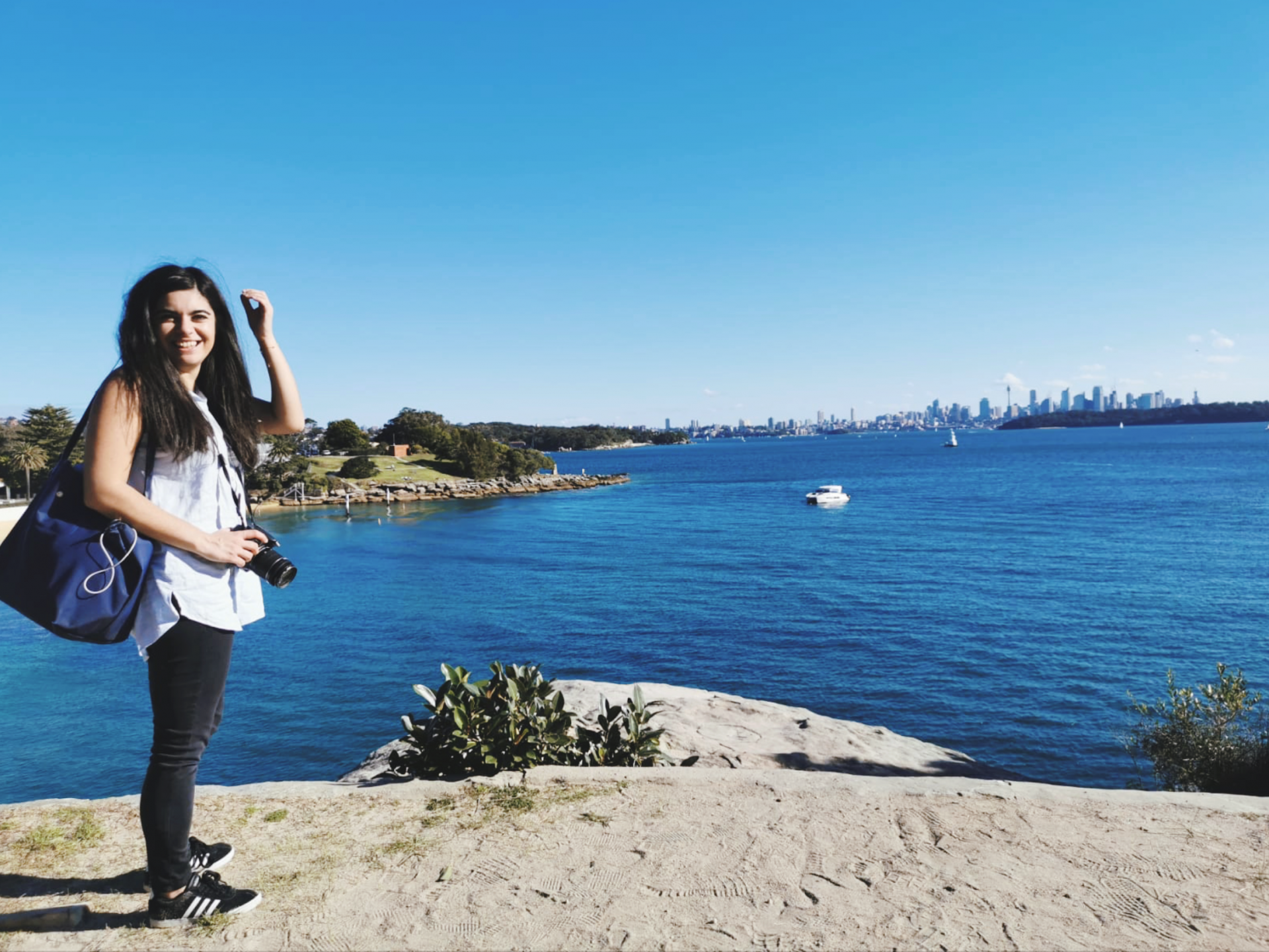 My First Month in Australia

Landing in Sydney was love at first sight.

Flying in over the coast as the dawn broke felt like being in a coming-of-age film. There’s a very disconcerting moment as you fly over the water, getting closer and closer to the waves with no sight of land beneath you – I was mildly concerned we were about to land in the sea! – before you touch down on the runway. The sun had just come up when I arrived in Sydney at the beginning of August – supposedly, in the middle of a cold snap.

As soon as I landed, I was taken for a drink at Ravesis, a famous hotel on Bondi, by Hannah, a friend from home. It was so good to see a friendly face – and as you can see, the sun came out, despite the wind!

I had a ton of admin to do during my week in Sydney, so sadly I didn’t do as much sightseeing as I’d hoped – but my plan is to go back up there hopefully soon so fingers crossed I’ll get to live my best tourist life soon!

What I did manage to do was part of the cliffside walk at Bondi.

Bondi truly blew me away. It’s like a tropical beach only forty minutes from the city – convenient bus stop to boot. The sand is white, the water is turquoise-running-into-deep-blue, and although I’ve yet to see a whale, I know they’re out there.

I took a walk with my amazing friend from London, Hannah. She took me to her favourite spot, and then we took a shortened version of the clifftop walk. The vistas are out of this world – bustling city to the right, sleepy beachside town to the left. All in one gaze!

The vibe (v Aussie slang right here) is nuts. It’s chill and vibrant at the same time and I loved it.

One of the biggest reasons I wanted to move to Australia is the arts scene. 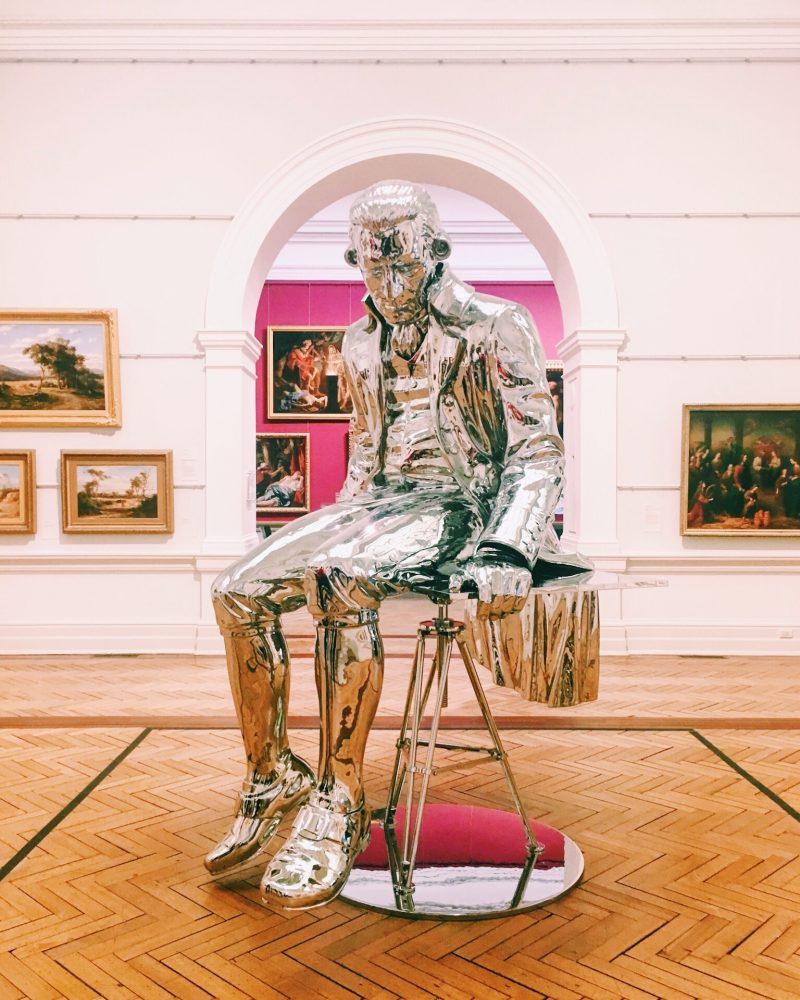 There’s a really distinct flavour to Australian arts – it’s vibrant, loose and energetic. It’s so rich and full of life. So when I have had a spare moment, I’ve prioritised visiting galleries and makers. I went to the Gallery of NSW in Sydney, which was fascinating. My priority was the Indigenous Art floor, which was incredible. There was a huge range of art – from older collections to contemporary paintings. I also went to the NGV and NGV Ian Potter in Melbourne, to see local and international work. I loved the exhibitions at the NGV Ian Potter, and if I get a spare rainy afternoon to myself, I would love to hole up in the fantastically intricate NGV and draw some of the collections there.

I went to a sample sale by the fantastic Public Holiday in my first week – I thought I’d be mega keen and arrive on the dot at 10AM. As I walked up, I felt a bit silly – how lame am I, turning up before opening at a small studio! – but in fact there was a line ten metres long! By the time I actually got in, it was heaving – a tiny studio rammed with fans precariously balancing beautiful products in their arms. I got away with two mugs, two cups and a plate for $160 – well over two-thirds off full price. I was lucky – by 10:25, everything had gone. I spoke to the ceramicist – she said she’d planned to close at 1PM!  Ceramics are everywhere here – independent makers running sold-out workshops, doing partnerships with clothing stores, or even having their own standalone shops, as is the case of the beautiful Takeawei.

I’ve also spent a fair amount in the shops here.

The Aussie vibe of the arts scene is also seen in how that trickles down to the shops. This is reflected from indie-yet-chain shops like Gorman (whoops, there goes $400 in the sale…) that I’ve been following from the UK for a number of years, to the beautiful one-of-a-kind stores like Variety Hour and Third Drawer Down, to the ceramics (as mentioned). It’s SO much easier to shop independent here – to find unique, handcrafted and one-of-a-kind items, from clothing to stationery to homewares.  (It’s also easy to find the stores I loved in Singapore – hello Innisfree, Sephora and Daiso!)

Melbourne really grows on you.

When I first arrived in Melbourne, I was disappointed. Not right away – I landed in Avalon, which is an hour outside Melbourne proper. It was dark, and the sky was the tapestry of stars you read about in teen coming-of-age novels that you don’t think really exist in real life. The entire inky blackness was studded over and over again with pinpricks of light. It felt majestic and huge.

But when I woke up the next day, I woke to a building site (my AirBNB was undergoing renovations) in a fairly industrial part of Melbourne. It wasn’t suffused with golden daylight in the way Sydney was, it didn’t feel as friendly, it didn’t have a tropical white-sand beach in the middle of the city, and the architecture wasn’t half as beautiful. It also, strangely, felt so much bigger than Sydney – much more anonymous. It all felt a lot like London – which was nice in that it felt like I’d fit in, but not really what I was after for my year abroad.

It was also absolutely freezing.

I was lucky my AirBNB had space heaters, and I spent my 2 weeks there with them about a foot away from my legs, wrapped up in as many layers as I could, because as soon as I left the just-about-a-metre-wide diameter of the heated air, I went back to living in an ice box. Australian homes are designed to keep heat OUT (versus British homes, designed to keep heat IN) which I wasn’t used to at all. It could be 14◦C outside, but it felt like 6◦C inside.

I stayed in South Yarra – which was a great place to get my bearings. Close to tons of public transport, on the river and feeling very safe, I was near to the absolutely incredible Darling Cafe – where I had one of the best meals of my life.

Side note: “one of the best meals of my life” is a phrase that I think is going to run out of steam soon – as pretty much every time I’ve gone out to eat in Australia – from a cheerful chicken wrap at Biggie Smalls, to edamame at a local sushi joint, to beetroot and ricotta fritters, to duck with pomegranate, to, to, to… it’s all been mind-blowingly tasty. Australia knows how to eat.

I had a week to ~sort my life out~ before starting work (a short-term freelance gig I’d agreed back in the UK with another ad agency) remotely. I spent that week largely running about trying to find a studio flat that was within my budget – it was both easy and not easy. The entire experience was incredibly stressful; as I wasn’t sure whether or not I’d be staying in Melbourne, I decided I only wanted to rent for the length of my freelance contract, which limited me to finding an AirBNB (expensive for the perks), or a short-term studio let. I don’t drive, so outer suburbs were out – I wanted to be within walking distance of work but with good transport connections in case it rained (Melbourne being the city of Four Seasons In One Day – which everyone told me but I didn’t really believe until I got here).

Exploring the suburbs just a two-stop tram from the CBD really brought out Melbourne’s history.

I really loved Carlton, a gorgeous suburb filled with what in my head I’m calling “Australian” houses – small, painted houses with gorgeous ironwork balcony-esque railings across the second storey. However, the only studio I found there went about six hours after I viewed it. The search resumed – hours and tons of messages sent to various people to see if this flat or that flat are still available. I spent a day zig-zagging across Melbourne before finding a gorgeous studio that is a reasonable walk from the famous Queen Victoria market, the CBD and my office. An email to the landlady, and then it was done!

It was both stressful and not in that the whole thing took about four days of super intense searching, then all of a sudden, it was over. In the UK, it’s a gradual process that involves (usually) weeks of looking, various negotiations and then a long process of referencing. Perhaps this was just because I rented for the short-term, but it was an intense amount of work for an almost anticlimactic (but positive!) conclusion.

The longer I’ve stayed here, the more I’ve been enchanted (yes, enchanted) by the markets here – the biggest and most famous being the Queen Victoria Market. I’ve now wandered through three times, and each time there’s a whole huge new area I’ve not spotted before. It’s a wild mix of local produce, gourmet deli products in a beautiful Victorian building, edgy crafts sold from painted shipping containers, and lots and lots of “standard” market fare – tourist jumpers (I may or may not have bought an ‘Australia’ green-and-gold hoodie… it’s been cold!) and tees, souvenirs and paintings, knock-offs and genuine local crafts.

I’ve also visited the Rose St market (arts & crafts from local makers), and the South Melbourne market (a beautiful old building surrounded by groceries but inside is a whirlwind of beautiful local products and miniature shops). From what I can tell – there are tons more to explore. And from this week, the QV market is opening up ‘after dark’ for a month-long Wednesday-night festival with new stalls and entertainment.

It’s terrifying how quickly the past 6 weeks (!) have flown by.

I gave myself a bit of leeway at first – I was stacked with admin in Sydney, then consumed by flat-hunting in Melbourne, then starting my freelance contract. I was allowed the evening and weekend off. No pressure. I’ve got a year.

But I’m now 6 weeks in and rapidly aware how quickly my time in this beautiful country is eking away. I’ve been on my first organised tour to the Yarra Valley, picked up the pace and followed the Lonely Planet’s Melbourne CBD walking tour, and surprised the employee at the Melbourne Tourist Information hut by asking for every single walking-tour map they have. I’m checking the weather forecasts daily for weekend rain likelihood, hoping to pack in as many activities as possible.

It’s hitting Spring, and soon will be Summer – so I’ll get to see Australia at its sun-drenched finest. Wish me luck!

Have you moved to Australia? What was your first month like? Let me know in the comments! 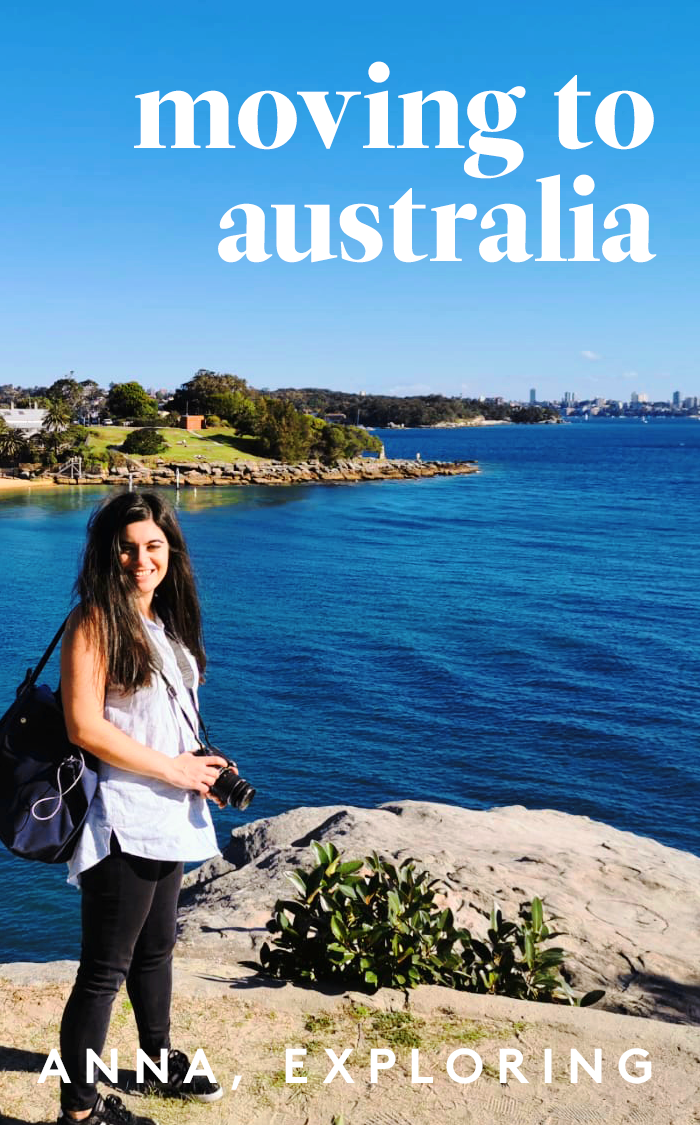 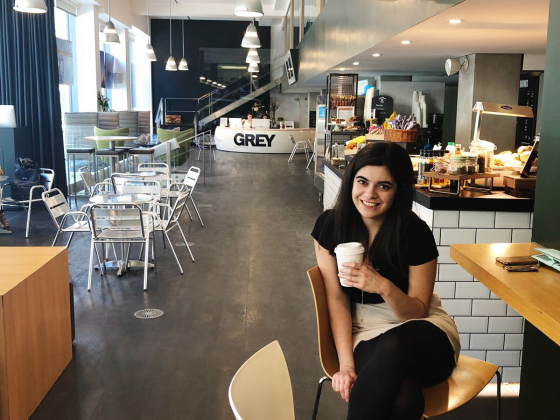 Leaving a Job You Love for Travel 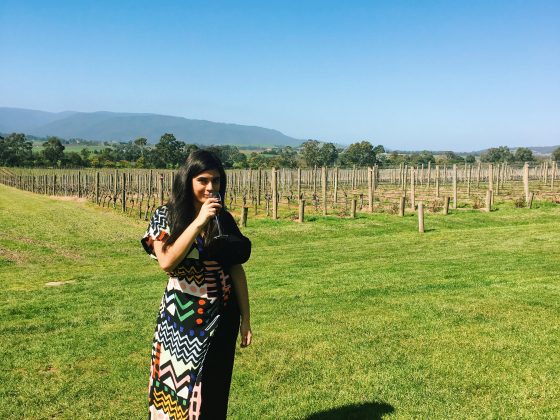 Touring the Wineries of the Yarra Valley (Vinetrekker Review)